Egypt is a land of startling contrasts.  Isolated, arid deserts and fertile river floodplains.  Polluted, congested cities and unspoiled, desolate riverbanks.  Illegally constructed buildings, likely to topple at the first suspicion of an earthquake, and Pyramids and temples that have withstood all that nature has thrown at them for over 5,000 years.

Egypt continues to mesmerise travellers, hundreds of years after the first tourists turned up to inspect the centuries old legacy of the Pharaohs.

Our 10-day Egypt tour with Peregrine Adventures took us from Cairo to Aswan and back again, providing an insight into the ancient Egyptian psyche and unravelling the mysteries of this ancient civilisation.

For me, the trip had four highlights;

Arriving in Cairo, you know you’ve stepped into something special.  Never before have I experienced a rubbish dump in the middle of a city, surrounded by people’s homes, with pigs used as mobile mulchers.  Nor have I seen so many people living in a cemetery, in a suburb known as the City of the Dead.  Yet neither have I been in a city where I have felt entirely safe, where the locals are incredibly friendly (if slightly over curious!), where the roads are as busy at midnight as they are during the morning rush-hour, and where you are guaranteed an experience that you can only get rummaging about in the shadows of such an ancient civilisation.

Cairo’s roads cannot be judged by New Zealand norms.  One taxi driver took great delight telling us how safe he was and that he had never crashed his car.  The rolls of sellotape holding both of his wing mirrors together suggested that he was being at least slightly economical with the truth, but we jumped in anyway.  His taxi looked no worse than any other in the vicinity!

Cairo and Giza’s combined population of 22 million put Auckland’s traffic congestion into perspective.  They have minimised gridlock by having few lane markings and negligible numbers of traffic lights.  These omissions enable seven or eight cars abreast to fit in a space that, in New Zealand, would comfortably hold four.

Egyptians communicate energetically via their horns.  A single honk can mean anything from “get out the way” to “if you just squeeze slightly to the left, I can get my car between you and the pavement without having to mount it”.  Remarkably, Caireans have an innate understanding of what each honk means and whether or not it is directed at them – particularly impressive when you understand that most drivers are frantically honking most of the time.

Our official tour began with a visit to Memphis and Saqqara near Cairo.  Here you start learning the importance of ego to the ancient Pharaohs.  The enormous statue of Ramesses II is a great example of how these ancient kings viewed their importance and self-worth:

Saqqara boasts Djozer’s Step Pyramid, a predecessor to its more famous neighbours at Giza.  Dating to around 2630 BC, it started as a single bench (or mastaba), but grew to a total of six mastabas placed on top of one another by the time he died.

If the Pyramid’s size and surroundings are not sufficiently impressive, knowing that it has stood for almost 5,000 years certainly gives you a sense of how well things were built in those days!

Giza’s Plateau (home of the Pyramids and Sphinx) is equally impressive.  It is truly fascinating, and somewhat humbling, to examine the Pyramids and to consider the workers who toiled so hard to complete them.  It is even more fascinating and equally humbling to think that, had we been about in their heyday, we would never have been allowed in the inner sanctuaries that we were being guided through.  It is perhaps most fascinating, though not at all humbling, to walk around the corner from these structures and find a KFC, a Pizza Hut and a fake Hard Rock Café!  I guess that’s progress for you!

Khafre’s Pyramid is most impressive, with its limestone cap and Sphinx, although Khufu’s is the oldest of the three on the Plateau.  The splendour of the area is tempered by the litter left by tourists; sadly typical of many Egyptian tourist sites.

Khufu’s Solar Boat museum was also worth a visit.  Not only was the air conditioning a welcome relief from the oppressive July heat, but the 3,000 year old boat, believed to have been used to take the dead Pharaoh to his Pyramid, was very impressive in its own right.

From Cairo, we headed south to Luxor by sleeper train; an experience I’d recommend trying no more than once, if you want a decent night’s sleep!

Once in Southern Egypt, you are coming forward in time and many temples in this area were still being added to in Roman times.

Approaching Karnak Temple by horse and cart at 7.30am, the increase in temperature compared to Cairo was immediately evident.  Indeed, it wasn’t unusual for temperatures to reach 48C.

So much is packed into the 3,500 year old sprawling temple complex, including the 134 columned Hypostyle hall.  Commenced in 1390BC, the hall was still being decorated some 177 years later.  Imagining such sustained construction nowadays is a real challenge. 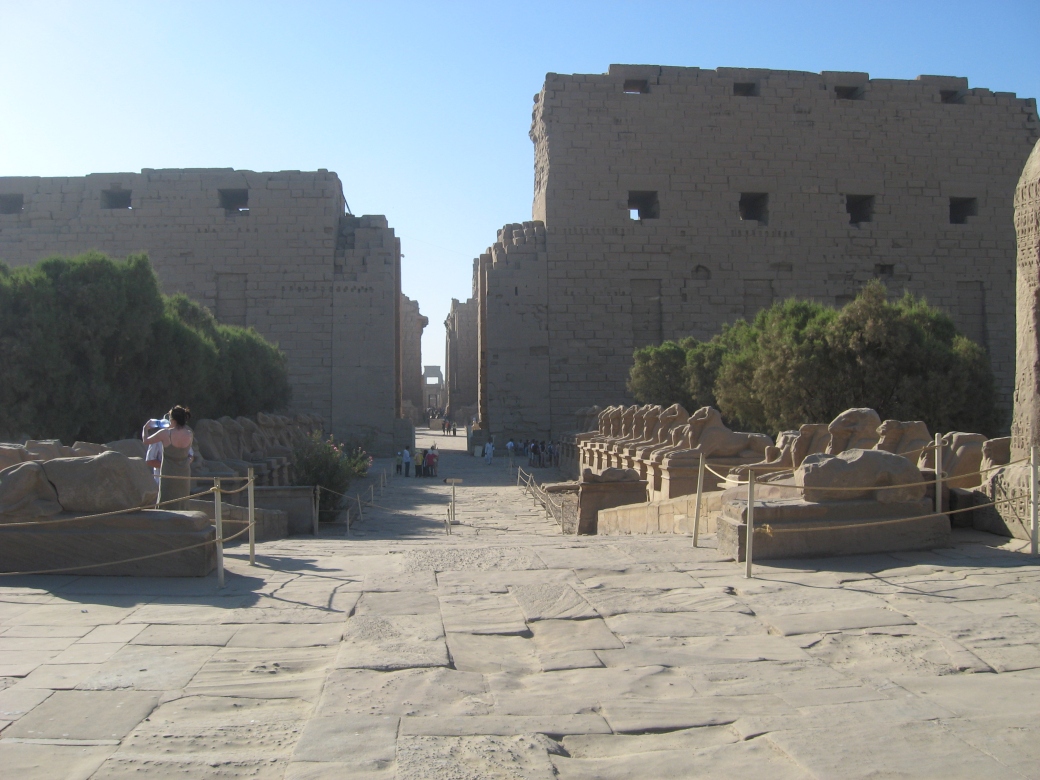 Western entrance to Karnak Temple through an avenue of ram-headed sphinxes.

The Hypostyle hall’s 134 columns leave you with a sense of enduring admiration for their craftsmen.  The undersides of some lintels still retain much of their original colour; vivid hues of red, yellow and blue.

The temple still retains two of its original six obelisks, one of which was built by Hatshepsut, the first female Pharaoh (who reigned as if she were a male). The other was built by Thutmose III, Hatshepsut’s stepson.

It was disappointing to leave Karnak Temple, as we could have spent several more hours exploring.  Our disappointment was soon forgotten on arriving at the Valley of the Kings, however.  A huge area on the West Bank of the Nile, this was the burial ground for Pharaohs, Queens and Nobles from around 1500BC.

Our day got underway with a dawn balloon trip, taking in the spectacular vista before the inevitable crowds descended.  The peacefulness of sun-rise at 1500ft in near total silence totally justified the US$95 per person cost.

Following an inch-perfect landing, we were bussed to the Valley of the Kings, where our entry fee entitled us to explore the resting places of three Pharaohs.  Our guide showed us to those of Ramesses IV (a simple, early style tomb with vivid, colourful scenes on the ceiling) and Merneptah (a more intricate tomb with a much steeper entrance).  For our third, we walked to the far end of the Valley to the temple of Thutmosis III.  This was a fascinating, if somewhat claustrophobic, tomb with simple wall paintings depicting instructions for the Pharaoh’s progression to the afterlife.

Although this tomb did not boast the vivid colours of the other two we visited, it was certainly my favourite.  Unfortunately, no photography can be carried out within the tombs, as this can damage the paint.

On the opposite side of the hill from the Valley of the Kings lies the Mortuary Temple of Hatshepsut.  Designed to legitimise her right to rule, much was made of her feats, including trading voyages that she oversaw to neighbouring countries.  Most of Hatshepsut’s images in this temple were destroyed by those who came after her.

Many Egyptian tours include a trip on the Nile.  Not wanting to “rough it” in a felucca (a small sail boat that has been in existence for centuries in Egypt), we opted for a cruise style ship, the Atun, instead.  There are many such ships, with varying degrees of luxury. Peregrine’s choice in ship (not to mention their outstanding guide Big Mo) was excellent and made for a very relaxing three day cruise, during which we took in temples at Edfu, Komombo and Philae.  The cruise provided an excellent opportunity for relaxing and watching life on the Nile.

Philae Temple was possibly one of the most impressive to approach.  Built for the God Isis, it was relocated following the building of the Aswan High Dam.  The island on which it was originally located is now underwater.

The Romans continued to add to Philae Temple and Trajan’s kiosk, built to embellish existing features of the temple, is a great example of this.  It demonstrates that some of these Pagan temples were used until fairly recently.

Our final destination prior to returning to Cairo was Abu Simbel.  Here we visited 2 temples; the larger one celebrating the great Pharaoh Ramesses II, the other celebrating his most famous wife, Nefertari.  Like Philae Temple, both of these were cut and moved to higher ground due to the Aswan High Dam.  Had they not been moved, they would currently be submerged.

Ramesses demonstrates the extent of his ego through his four seated statues (that are as tall as a five to six storey building) and through the depiction of him being an equal with the three Gods with whom he is seated in the inner sanctuary.

Ramesses II had around 110 children and probably lived into his 90s.  Given that he spent the first 20 years of his Kingship at war building his empire; it seems surprising that he also had the time to be one of the most prolific builders of all the Pharaohs.

Having finished in Southern Egypt, it was time to return to Cairo for a final couple of days sight-seeing. It didn’t take long to get back into the clamour of Cairo life.  After the heat of Southern Egypt, the cool 38C of Cairo almost felt civilised!

As I said at the outset, Egypt is a land of startling contrasts.  It is precisely these contrasts that ignite your senses, guiding you back to early Dynastic times, immersing you in a history that is very hard to imagine without being there.  I suspect that Egypt will still be mesmerising travellers such as me in another 5 millennia, with the wondrous legacy of the Pharaohs.