I’ll start this blog with a brief confession.  I’m a bit of a petrolhead.  I’ve owned 12* cars myself (starting with a Triumph Spitfire that used to have a small problem with it’s steering wheel.  And by “small” problem, I mean it was forever falling off as I was driving – not an ideal attribute in cars, but one that, perhaps worryingly, used to amuse rather than scare me at the time).

This is the third V8 Commodore that I’ve owned (one being an HSV Senator).  And it’s easily the best.

As a New Zealand import myself, I come from a land where V8s are not particularly numerous –  primarily, I suspect, due to the accompanying petrol prices that require regular mortgage top-ups to fill the fuel tank.

I’ve long been a fan of the throaty American V8, with their gravelly, lumpy cam burbles.  It probably goes back to car chases in Starsky and Hutch and the Streets of San Fransisco that I used to love as a kid.  My dad was a petrolhead too, and I guess I was destined to follow in his love of the internal combustion engine.

I said that I’d owned three Commodores.  I only half-jokingly consider them to be part of my mid-life crisis (!) and I’m probably quite lucky that my wife has humoured me (thus far) with this on-going issue.  I’m not entirely sure how much more she will humour me; my expectation being probably not much – so I’ll be enjoying this one for a while yet!  It kind of helps that she loves cars too mind you!

My first foray into the V8 market was the 6 litre VE Commodore SS.  To properly love this car, I had to rechip it, put an OTR air intake on and fit an after-market Di Filippo performance exhaust (Holden made it far too quiet for a V8).  The exhaust was needed to make it sound better, but it was the re-chipping and OTR air intake that made the difference to the performance, especially its torque.

Believe it or not, I traded this one in for a Porsche 911 Targa 4 (part 2 of my mid-life crisis!).  I started off using this as my daily drive, but was putting way too many kms on it. It now stays in the garage and comes out at the weekend, when the weather is nice.

Shortly after buying it, I was made redundant and used some of my redundancy to buy my second V8 – a very second hand VZ Senator (it had seen better days).  It was older, but still sounded nice, had decent power, but I found that the suspension on it was way too spongey, giving it a bouncy rather than firm ride.  It didn’t hold the road as well as the VE.

When I’d bought it, it only came with one key.  I was in the dealership looking at getting another one made when I saw the Holden Insignia VXR.  I really liked the look of it and decided to trade the Senator in.  While it was only a 2.8 litre V6 Turbo, I convinced myself I’d love it.  And I did.  Just not as much as the V8.

So along came the VF2 Redline.  I’m not going to get all deep and meaningful with specifications, as there are far better sources out there for that.  Suffice to say that it has the 6.2 litre LS3 alloy engine (out of the Corvette in the US market), producing 304kw (or 408hp in old money) and 570nm of torque.  When compared to my original VE with 270kw and 530nm of torque, this was a decent increase.  But the improvements didn’t stop there!

There are a couple of aspects about the car that I don’t like, so I’ll get those out of the way first;

Well, the first thing I have to say is that Holden gave this one a proper exhaust!  An exhaust that any self-respecting petrolhead will nod at and smile.  Similar to the higher spec HSVs, it has a bi-modal version, which basically means you can have it set to “quiet” or “gnarly muscle car” (note – these aren’t the options that Holden list).  I refuse to believe that anyone buys a V8 to use a “quiet” setting (sort of defeats the purpose surely?), but it has one.  You may be unsurprised to know that apart from putting it on to check it worked, I want my car to sound like the muscle car that it is.

One of the best parts about the exhaust is appreciated when you are in overrun – you get some great pops, cracks and burbles out of the exhaust.  It’s that genuine, gravelly muscle car sound that I’ve loved since I was a kid.  Whenever I’m on my own, I can have hours of endless fun accelerating in 2nd or 3rd, taking my foot off the accelerator and just listening to those aforementioned cracks and burbles.

Ok, who am I kidding – I don’t have to actually be on my own in the car.  I do it all the time, no matter who is in the car. I’m one of those potentially annoying people who likes to use the paddle shifts to slow down rather than braking – an unintended consequence of which is even more burbles!  It even pops a couple of times when you start it up, getting my day off to a positive start every time:

As I noted earlier, this car is the LS3 304kw engine.  While that’s nowhere near the top of the range (Walkinshaw can give it 507kw if you have a bit of spare cash) for power and torque, it’s plenty for New Zealand’s roads.  It’ll get you from 0-100km/h in around 5 seconds (not too dissimilar to our Targa 4), and it will do it with a fair bit of noise and muscle.  As well as the nice sounding external exhaust, you get some great sounds from the engine piped into the cabin, enhancing that V8 experience.

The 304kw means that, even with the traction control on, it’s easy to make the rear of the car slip out and get those wheels spinning (not advisable, as the 19″ wheels mean you’ll be forking out a fair old whack on tyres if you do this too often), especially if you apply the power before you’re in a straight line.  If it’s wet, this becomes even more likely.

The Redline comes with big Brembo brakes and black 19″ wheels as standard.  Those all round Brembos mean that as well as getting you up to speed quickly, it will do a pretty tidy job of getting you stopped again.  They look great too, in red.

It also comes, as many cars do these days, with daytime LED running lights (see below).  I do like the slightly remodelled front end of this compared to the older VE Commodore.  As well as the LED lights, it has some functional brake cooling ducts.  On the bonnet it also has a couple of vents that help cool that mighty V8 that hides below. 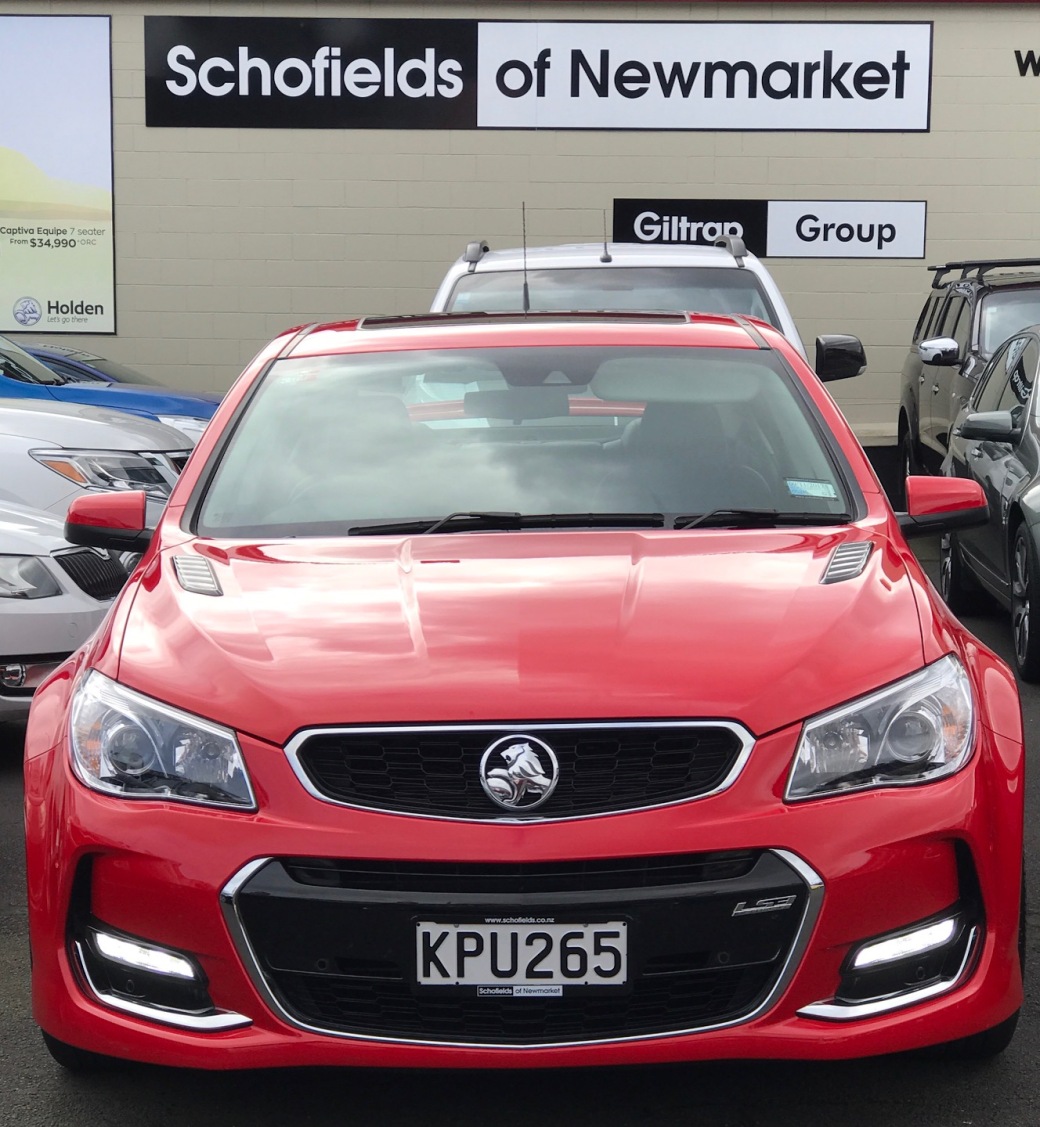 It also has a handy heads-up display with a number of settings.  My preference is to leave it with the speed, the speed limit and the temperature, but there are a number of other options, including revs and g-force.  The main thing for me is to make sure that my heavy right foot doesn’t get me into too much trouble, hence leaving it on this setting. The downside of this, is when I get into the Porsche or my wife’s Golf GTI, I find myself looking at the window for my speed and finding nothing! 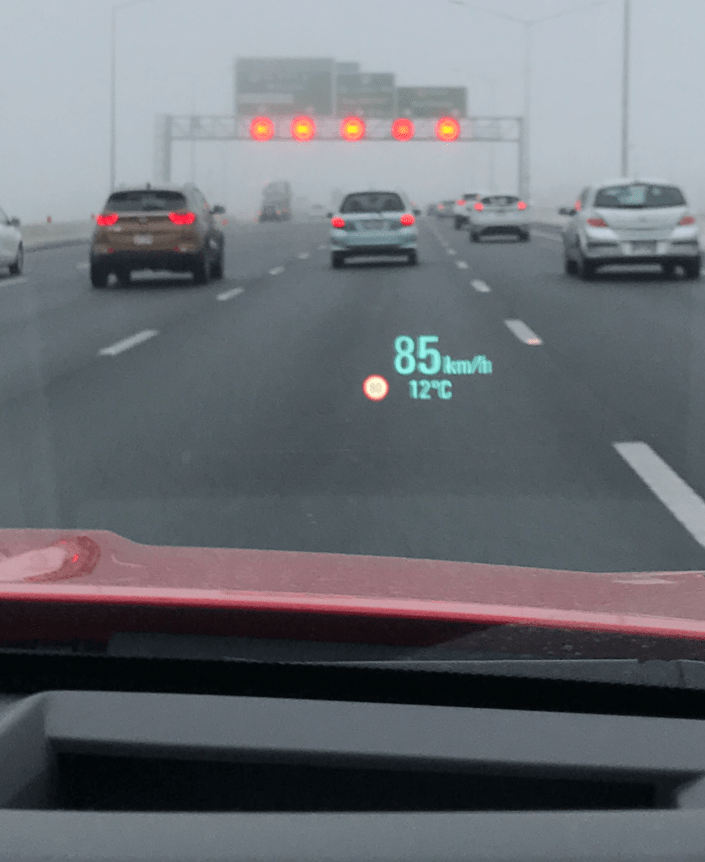 The Australian V8 racing teams who use the Holden have done a decent job of keeping the car look like the road variant on which it is loosely based (as noted in Shane Van Gisbergen’s #97 Red Bull Holden Racing Team Commodore below).  For me, this is part of the attraction of these cars.  You can own a car that is powerful, sounds great and (with a bit of imagination) you could be racing the Supercars guys around Bathurst.

Inside is classy, but you can tell it’s not a top of the range model.  The leather seats are comfortable but not as hugging as, say, the Recaro seats on the Insignia VXR.

I love the shape and feel of the steering wheel and, unlike some cars, there are not buttons and gadgets everywhere.  You can do most of what you need with the touch screen entertainment system and the buttons on the steering wheel.

As well as the paddles on the steering wheel to change gear, you can also use the gear stick and shift up and down.  You just need to take it out of auto by pushing it to the left.  It’s then forward for down and back for up – just like the racing variants on the track! 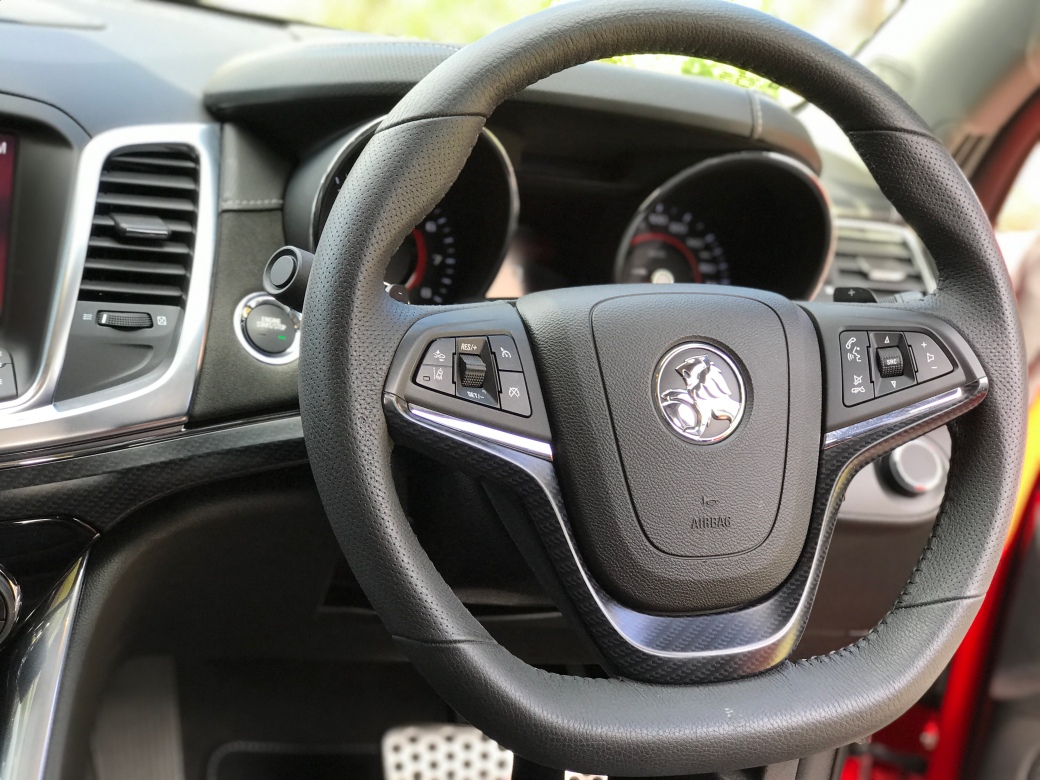 I personally think that the real beauty of these cars is the value that you get for the price.  I bought mine second hand with 20,000 kms on the clock and got it for less than NZ$60k.  To get an equivalent performance out of a European car, you’re probably going to be paying almost twice that. It puts muscle cars into the domain of us normal folks.

In short, this car is noisy, a little bit naughty and an awful lot of fun.  I just love the sound and love to drive it. Dollar for dollar, it has to be one of the best value cars on the road, on the assumption that it’s an affordable V8 you are looking for.  I give myself a little grin every morning when I start it up and hear that “growl (pause) pop pop”.

*In case anyone is interested, the 12 cars that I’ve personally owned (in order) are;

We still have the Porsche and I sometimes get to drive that at the weekend – my wife has a tendency to sneak into the driving seat before I even know we are going out!

And “just because”, here’s a photo of a couple of guys who race these beasts for a living! James Courtney (right) and Scotty Pye (left).